In the Arena: A Tribute to Omen’s J.D. Kimball and His Legacy

Today marks fifteen years since John David (J.D.) Kimball passed away. I wanted to take the time today to remember him and highlight his legacy. Kimball is known for his work as Omen’s vocalist and lyricist during their classic era. Together with Jody Henry on bass guitar, Steve Wittig on drums, and founder Kenny Powell on lead/rhythm guitar, the classic Omen line-up put out three full length albums and EP of some of the best US power metal around. Kimball was one of the greatest vocalists in the genre and I wanted to honor his legacy by discussing early Omen’s sound and his contribution to the metal community.

Who are Omen and what style do they play?

Omen were among the first set of bands to play United States power metal (USPM). USPM is different than the European variety that the vast majority of folks are familiar with. It predates EUPM by a few years. USPM is more deeply rooted in traditional metal and often incorporates elements of thrash and speed metal. It has more bass, mid-tempo sections, and overall grit. Keyboards aren’t often included and when they are included they’re done so as more of an accent than main component of the music.

Omen are a flagship USPM band and undoubtedly one of the best and most influential bands in the scene. They were innovators in the early days of power metal when genre lines were still blurry. Together with bands like Manowar, Warlord, and Manilla Road they also helped to solidify the foundation of epic heavy metal. Epic heavy metal blends elements of traditional metal, US-style power metal, doom metal, and sometimes even thrash metal with loose song structures and fantasy lyrics to create an epic soundscape that matches the genre name.

Omen’s take on the power sound is distinct – they’re rugged but they manage to maintain class without sounding too clean. There’s a raw earnestness to their sound that just draws you in. As mentioned previously, the classic line-up consisted of J.D. Kimball on vocals, Jody Henry on bass guitar, Steve Wittig on drums, and founder Kenny Powell on lead/rhythm guitar.  All of the music these guys put out while together is top-notch and deserves a listen.

Battle Cry (1984) – The album that started it all. Battle Cry isn’t a pretty album in the slightest. It’s straightforward and has absolutely no frills. You won’t find a fancy power ballad here or any lengthy songs. In fact, most of the songs clock in around or just under four minutes long. It’s the ruthless efficiency and earnestness that makes Battle Cry the classic that it is. Powell’s riffing and lead style are so very unique and Kimball always finds a way to insert an appropriate vocal line above it all. This album is just chock-full of memorable lyrics and catchy guitar hooks. While everything in their classic period is stellar, Omen’s first effort is their best in my opinion and there’s few records out there that match the quality of Battle Cry.

Warning of Danger (1985) – Omen’s sophomore effort came just one year later in 1985. Warning of Danger continues with the blueprint that Battle Cry laid out. The songs are a bit more refined and moved more in the classic power metal direction that we know. There’s less aggression and more variety in the tracks overall but the album is also just a tad bit spottier than Battle Cry. While I feel that Omen’s debut captured their spirit the best, Warning of Danger is a more than worthy follow-up and another classic in my eyes.

The Curse (1986) – The Curse marks three classic albums in three years, a truly remarkable feat that few are able to achieve. Omen’s third studio effort strays further  in the direction of Warning of Danger, with a more melodic and less aggressive approach to things. The songs are a bit longer by Omen standards, with tracks like “Teeth of the Hydra” clocking in at almost six minutes long. There’s a few standout songs such as the previously mentioned “Teeth of the Hydra” as well as “Holy Martyr” that really stick out as some of the best that Omen have ever done. They’re both mid-paced and massive epics that really showcase the band’s songwriting abilities and Kimball’s mighty voice.

Nightmares EP (1987) – Omen’s last output featuring J.D., Nightmares consists of just two new tracks, three previous studio recordings, and an AC/DC cover. Nowadays, it’s packaged with 1986’s The Curse , and this works quite well as the new content on the EP matches the sound on that album quite well. Despite the very short length of the new content, the two songs are solid and worth checking out! 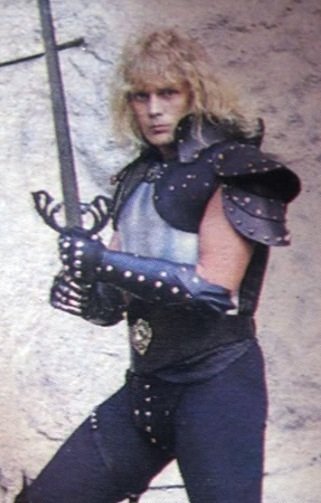 Kimball was one of a kind. There wasn’t really anyone out there quite like him. His charm and charisma were unmatched. The mid-range, melodic rasp that he came to be known for slotted perfectly over the unique style of guitar leads and riffs that Powell brought to the table. The pack-a-day grit that JD had really helped to solidify Omen’s sound. Battles and high fantasy were the dominant lyrical themes that Kimball loved to explore. With his triumphant bellow and glorious lyrics, JD painted the haunting tales of a warrior’s past like no other.

I’m on the younger side, so by the time I really got into metal Kimball had already passed away. With that said, his impact on me and countless others is undeniable. I’ve had every vocal line to 1984’s Battle Cry seared into my skull since my early teenage years. It really can’t be overstated how iconic Kimball was. He served a crucial role in molding Omen’s unique sound and they would not be nearly as influential as they are now without him.

J.D. was taken by the scourge known as cancer. I’ve had the unfortunate experience of losing several loved ones to the disease, one of which very recently. The prevalence of it means that my experience is all too common. Cancer is a brutal disease, but strides are being made each and everyday. If you’re interested: here’s a link to donate towards the Dana Farber Cancer Institute, a reputable cancer hospital and research center.

Rest in Power J.D. Kimball. You were a true metal warrior and your legacy will not be forgotten.

– “In the Arena” (lyrics written by Kimball on Battle Cry)

Thank you a lot for your dedication and passion for the best kind of music invented on this planet.
And special thanks for remembering Omen and brilliant Mr. Kimball.

Keep the flame burning. We are few in these days but we are immortal as well as our favorite music!

P.S. It would be absolutely fantastic to see somewhen some words from you (a little article, perhaps?) about my personal old-school hero, the Greek Demigod himself, David DeFeis.

I’m glad you enjoyed this article – Kimball’s charismatic vocals are some of the most iconic ever for me. DeFeis is certainly a legend in his own right too. If not an article, a classics highlight on some Virgin Steele is the least I can do – sometime soon!

Nothing beats the grandeur of Omen. Not even the best of Epic Metal records known to men.

That said I proudly wear them on my back.

Marco’s Guide to USPM Part I: The Basics, Essentials, and Modern Heroes

This article is the first in a trilogy of guides chronicling the United States power metal (USPM) scene. This first section focuses on defining the sound and providing listening essentials. It also includes excerpts from interviews with Mike Sabatini of Attacker and Howie Bentley of Cauldron Born.

The German thrash metal scene of the 1980s, often called Teutonic thrash because of the old Germanic tribe name, is not the most obscure or overlooked part of metal overall. Bands like Sodom or Kreator are popular and, relatively speaking, commercially successful. In terms of available information, the German metal media also make this scene quite approachable to a new listener: interviews, articles and documentaries are all available today within a few clicks. This is an invitation to take a look under the hood of a fascinating and very influential scene.

Into the Coven: The Year of the Plague (Best of 2020 Releases)

Beneath the land of warriors and magicians where Marco resides and compiles best of traditional heavy metal releases of the past, are the moldy catacombs where darker parts of Ride Into Glory dwell and the occult tunes echo. Here in our coven, we wanted to make a list of best releases of the year of the plague (Best of 2020).