Statement from the artists:

“East of Sun” is borrowed from the title of a collection of Norse folk tales. These stories are not part of a larger series, nor are they in any form of chronological order. They are simply a group of tales that entertained people, gave life to the ordinary or explained the extraordinary. For some, a story gives meaning to the mundane. When we collected the songs for “East of Sun” we didn’t have any sort of overarching themes or ambitious concept in mind. It is simply a collection of songs, each with its own purpose and idea, collected from the band’s inception in 2010 (“Bell Of Tarantia”, “Swan Road Saga”), the newest incarnation of the group (“Blade of Cimmeria”, “Warrior Without Fear”) and all the phases in between.

While we would never claim to be as moving or important as ancient folklore, we hope that “East of Sun” makes your work day a little more bearable, your drive home more fun, provide a boost of energy at the gym or simply provide an epic metal backdrop to a gathering of friends. It was recorded between the months of May 2017 and November 2017 at a technical institute in North Vancouver (involving many all-night sessions by our guitarists and dealing with our singer being denied at the Canadian border a handful of times) and we released the album at Keep It True Festival in April 2018 through Cruz Del Sur Records. 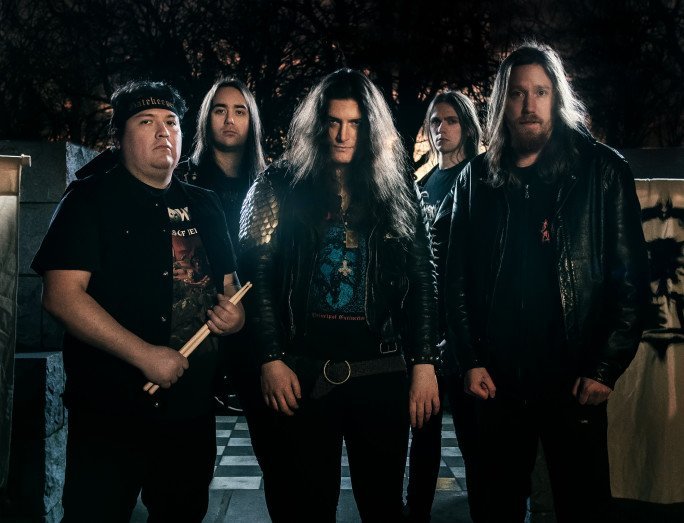 Gatekeeper, a project formed by guitarist Jeff Black, have existed in some form or another since 2009. After years of writing and pulling together a band, Jeff and co. burst out onto the scene in 2013 with their EP titled Prophecy and Judgment. Gatekeeper didn’t shy away from being very clear about their main influence – from the core sound to the imagery and lyrics, Prophecy and Judgment draws from German epic metal stalwarts Atlantean Kodex. Gatekeeper have finally graced us with their debut album, East of Sun, just a few months ago via Cruz Del Sur Records.

Gatekeeper caught my attention right away with their first EP. The early Manowar and Atlantean Kodex style of metal is among my favorites – this slow burn and tremendously epic sound is shamefully under-explored. Prophecy and Judgment demonstrated a band that clearly had good ideas and all the right influences, but something was missing. The “magick” that Atlantean Kodex possess wasn’t quite there and Gatekeeper didn’t bring enough of their own flair to the formula to make it new and exciting.

East of Sun demonstrates a step function improvement in songwriting and identity. This is apparent from the get go with the album opener “Blade of Cimmeria”, a high-energy ripper that I could not have possibly imagined coming from Gatekeeper in 2013. It’s an incredibly fast paced number and despite being just three minutes long, is filled with riffs on riffs, blistering leads, and catchy as hell vocal lines. This song feels a lot more Omen, Manilla Road, and Ironsword to me than anything else, but more importantly it’s the first time I really got the sense that it felt distinctly Gatekeeper. Unfortunately, this level of speed and intensity isn’t replicated again on the record. I would have liked to see Gatekeeper explore this direction more. It sounds unique to me and they executed it very well here.

The improved songwriting manifests itself in a several other spots as well. As demonstrated from the re-recorded “Northern Wolves”, the songs are tighter and flow smoother. Prophecy and Judgment fell into the trap of droning on too long with a riff or song and that is for the most part fixed on East of Sun. There’s more variety in the songs with a healthy amount of mid-paced sections and even some faster moments as seen in the opener that I previously mentioned. Overall, the production is top-notch. The mixing is done very well and everything fits together like puzzle pieces. The guitars and vocals are at the forefront as they should be in this style, the drum tone is marvelous, and there’s just enough bass to keep it all together.

I would be remiss if I didn’t dedicate an entire paragraph to the vocals. As is evidenced by my review of Traveler’s 2018 demo, I will take every opportunity I can get to sing the praises of vocalist Jean-Pierre Abboud (JP). His vocals are intense, emotional, and passionate. He proved himself to be one of the best modern vocalists in the traditional metal vein with his work in Borrowed Time. It’s no different this time around with Gatekeeper and Traveler. He is far and away the highlight of this album for me although I will say that his vocal style is suited more towards mid-paced and faster songs. There are times where Gatekeeper slow it down and he sounds a bit uncomfortable to me, but by and large the vocal lines on East of Sun are compelling and simply pleasant to listen to.

There’s something very nice and heartwarming about watching a band visibly grow and mature from release to release. The sleepless nights and handwork that Gatekeeper have put into this album has paid off. There are still a number of things to polish up, but Gatekeeper are just starting to get a proper foothold. I hope for everyone’s sake they don’t let go – bands in this style are few and far in between and their future is bright.

I gave it a shot, but this isn’t for me. It seems I can’t quite grasp the appeal of epic metal. I also take a bit of exception to Jean-Pierre Abboud’s vocals. He does nothing for me on this and having him try and power over the music itself I find a bit tedious. I could not wait for this album to end.

Hey Hal, what other epic metal have you given a shot? There’s a lot of variety in the genre and I think there’s a good chance you’ll find something you might like. I’ll be putting together a fairly comprehensive guide on epic metal in the future which will be of assistance here, but that isn’t likely to come before early 2019.