“The EP is a stop gap between getting a new record done later next year. We didn’t want to go too long between releases so this is a good compromise. This release is in the same direction of the last 2 full albums, a little heavier but still retaining the bands roots that hopefully please fans old and new. We are very happy with how it turned out. It’s a real honest recoding with real instrument sounds, no drum triggers or studio trickery. We are Old school and still record old school. Nothing too funny happened but we ate a lot of Arby’s roast beef sandwiches while recording in Ithaca with Alex Perialas. My new nickname is “Arby!!” 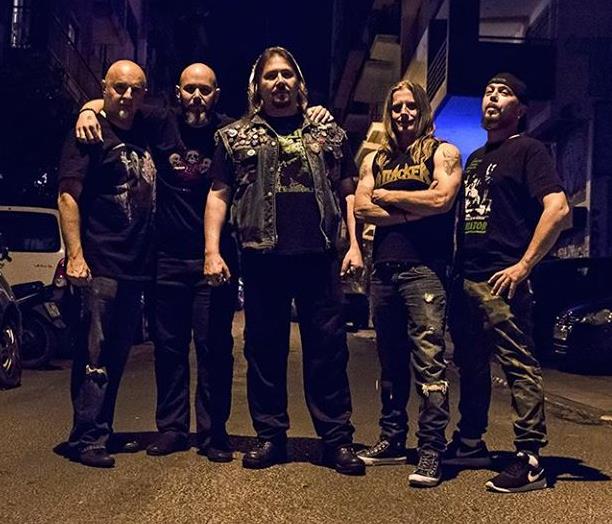 United States power metal stalwarts Attacker have seen a revitalization and revival of sorts in the last several years. With singer Bobby “Leather Lungs” Lucas on board, they put out 2013’s Giants of Canaan and 2016’s Sins of the World – material that rivals their classic duo of albums from the 1980s. Attacker are back again with a new EP released just last month, Armor of the Gods, with the intent of keeping their tremendous momentum in motion.

Over time, Attacker’s core sound has very much been preserved. They play a straight forward style of metal with an emphasis on strong riffs and vocals that show us why it’s called power metal in the first place. Attacker fall squarely into the more aggressive branch of USPM with peers like Jag Panzer, Vicious Rumors, and Liege Lord. With four new studio recordings and two live tracks, Armor of the Gods bring us more of the metal onslaught that we’ve come to expect from Attacker.

The new songs are all around five minutes each, which means we get a solid twenty minutes of new material to sink our teeth into. Everything that defines Attacker’s identity is out in full force here. The mid to fast paced guitar riffs have as much bite as ever. Sabatini’s characteristic drum beats have driven Attacker since day one and Armor of the Gods is no exception. Leather Lungs’ voice sound a tiny bit more contained and muted on this EP than the previous two efforts. However, even when he’s a step down from his best, Bobby’s better than the vast majority of vocalists. Attacker make sure to remind us why they’re called the lords of thunder – with no interludes, filler, or softer moments, Armor of the Gods gives you very little room to breathe as they churn out banging riff after banging riffs.

Where the EP falls flat is when it comes to song variety. Everything is tight, but the songs are formulaic. Given that they all clock in at around the same length (five minutes) and have a similar riffing style, it sometimes feels like I’m listening to the same song if I’m not focusing. The “Up the Hammers Fest” live tracks show that Attacker’s prowess isn’t limited to just the studio, but they felt a bit unnecessary to me here. I really just view them as cool little extras that make the purchase of the EP a bit nicer.

Armor of the Gods is an appropriate bridge and does exactly what it’s meant to do – help tide us over until a proper full length is out. It’s remarkable to me how much of their core sound Attacker has managed to preserve. It’s no secret that the vast majority of old school bands just flop when they try to go at it again, but Attacker are an exception to the rule. Mike Sabatini and co. haven’t skipped a beat and Armor of the Gods continues the trend.